Are you ready for the drop? This summer there will be two films on release about the same world: that of the DJ. We Are Your Friends stars Zac Efron, Emily Ratajkowski and Wes Bentley, and we will see in late August if the gilded version of DJing offered in the rather lengthy trailer bears out in the movie. Before that is an honest portrayal of the unstable, pulsating existence that an artistic career can bring in Mia Hansen-Løve’s brilliant Eden. With a magnetic performance from Félix de Givry, the film follows two decades in the life of Paul Vallée, a aspiring young DJ from Paris. Sex, drugs and techno all feature heavily, but never detract from the central thread of chasing a dream and the costs that come with it. It is based loosely on the experiences of Hansen-Løve’s own brother, like Paul a DJ since the mid-90s, and parallels the life of its protagonist with the increasing success of Daft Punk. Whether or not you are a fan of club music, the way the film uses its soundtrack contributes greatly to the authenticity of its journey. Check out the new trailer here:

After a ten-month festival tour including Toronto, New York, London and Sundance, the BFI-backed film drops (sorry) in the UK and Ireland on July 24th. There is also a glowing new poster below: 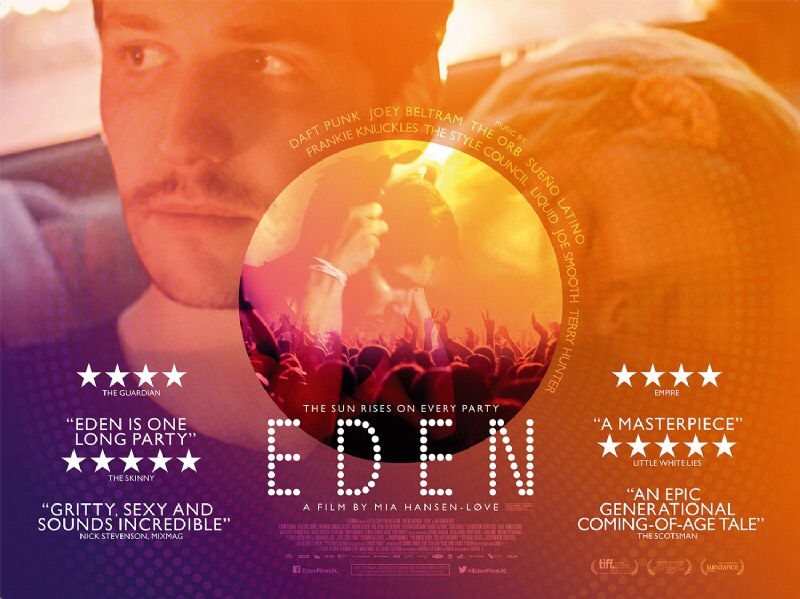